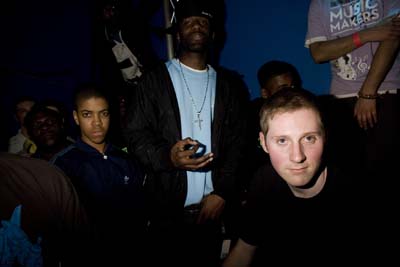 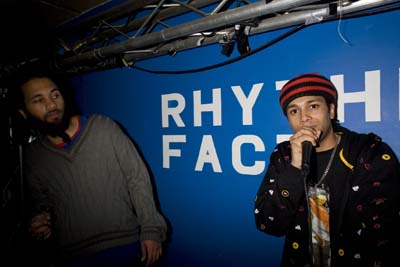 Purple and G Double: checking I’m in the house

I will always be eternally grateful to M.C. G Double, for sale for the public name-checks he’s given me.

They’ve only happened twice, viagra 60mg and each time it was upon entering a packed-out night club.

They go something like this: ‘Yo, yo! It’s Mark Burton, photographer, in the house!’

At which point, I’d like to pretend that I’d just made an ‘American Gangter-esque’ entrance into the club, replete with full length fur coat, Fedora, and a bikini-clad babe on each arm. Instead, I was fiddling with a flash gun, and Bronny and Kalleen (my ‘babes’) were having a good chat by the bar. 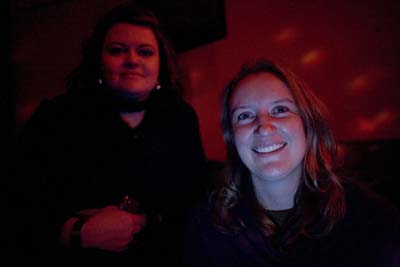 Kalleen and Bronny: We’ll wear our bikini’s next month

I know G Double, his M.C. buddy, Purple, and several other Grime artists as my cousin, ‘DJ Magic’ (or Peter, as he’s still referred to at family parties) runs London’s hottest Grime club night, ‘Dirty Canvas,’ with his friends David Moynihan and Robin Pasricha. As I realise people of all ages, and from different countries read my blog let me clarify: ‘Grime’ is the name used to describe a genre of music with its roots in rap, reggae and dance music. 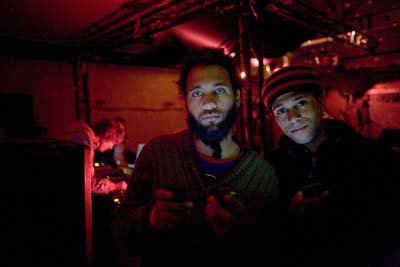 M.C.s Purple and G Double: by the light of the silvery mobile phone

Grime is very ‘street’ and also very hip. This leads to an interesting mix of folk at these nights, as Grime draws its followers from a wide social and cultural background. There is a lot of standing around at these nights between acts – and when the performers are on stage, the audience does a lot of head nodding and taking photos on mobile phones. The day it becomes evident their pictures are better than mine, I fear I may longer be given a backstage pass…… 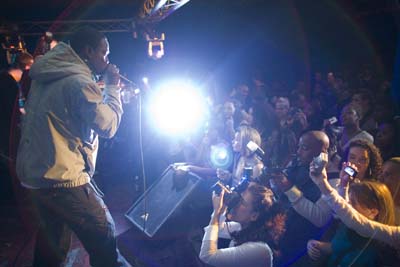 Peter, David and Robin started ‘Dirty Canvas’ about four years ago with a modest night in the Whitechapel Art Gallery bar. Fifty people was a good turn-out, but the atmosphere was always lively and kept people interested enough to come back for more. Dirty Canvas then moved onto the ICA where the numbers increased to about 200. Its new home is now at Rhythm Factory on Whitechapel High Street. From the difficulty I had making my way from one side of the club to the other, its fair to say there were about 400,000 people ‘in the house’ that night. 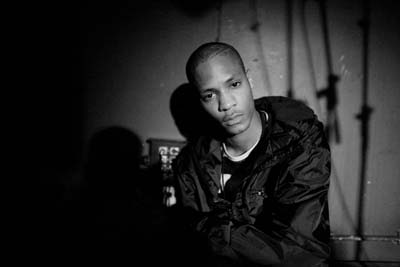 Personally, I think one of the big draws of the music is that is there is a limited amount of money to be made in Grime. There are a few exceptions – artists like Lethal B, Dizzee Rascal, Wiley and Kano have all had commerical success to varying degrees – but generally, whoever is involved is there for the love of it. 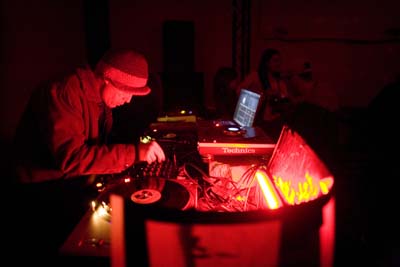 Show me the money: I know its here somewhere…..

The limited resources available to the Grime artists gives the scene a creative edge – and encourages a very ‘DIY’ approach to music making. Pirate radio stations play the latest tunes; independent releases get mixtapes and vinyl out to Grime’s followers. M.C. Ghettos latest mixtape, by way of example, sold 2500 copies in its first week of release. Pretty impressive stuff! Peter, David and Robin have also founded a record label called ‘No Hats, No Hoods.’ 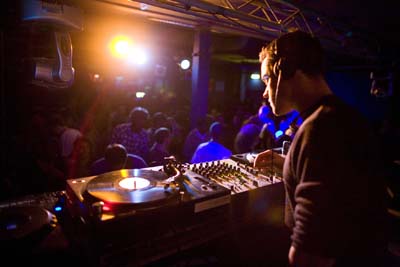 D.J. Logan Sama: to be found on the wheels of steel in nightclubs – and on Kiss FM

Its true, that Grime nights had a poor reputation about three years ago for being potentially, and sometimes, actually violent. Its also true that Dirty Canvas isn’t the kind of place you want to repeatedly keep treading on the biggest fellow’s trainers (you know, the one standing at the back with a hooded top and about ten burly mates). 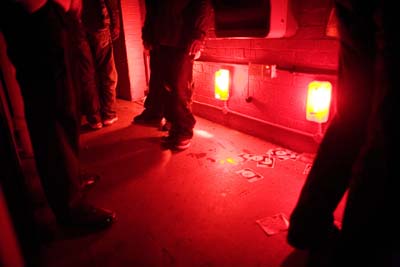 But Peter, David and Robin have had great success with their violence-free ‘Dirty Canvas’ nights. Much of this – I think – is down to their extremly calm personalities. Hyped-up rappers and their ego-monster managers can be ‘challanging’ to handle – especially when the club is packed, and they all think their boy should have been on stage ten minutes ago. This is where I’ve observed Peter at his serenist. Squeezed into a back-stage area the size of a garden shed, with umpteem artists, managers and posse members, Peter has a gift for absorbing stress and deflecting the demands of the unreasonable. Somehow this attitude backstage, and David’s calm demeanor on the door, filters outwards.

This means Dirty Canvas can be all about the music. Frenetic, creative, sometimes dreadful, often superb.